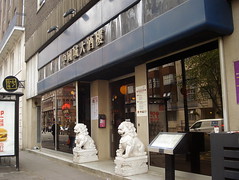 Kake, Sarah, bob, and friend visited on a Wednesday lunchtime in April 2014. There was one other party in when we arrived around 12:15pm, and a couple of others arrived during our visit, but there were always plenty of free tables. Music was playing, not too loud.

Unfortunately the quality of the dim sum was fairly mediocre, though some dishes were more acceptable than others. Vietnamese spring rolls photo were fine apart from being served lukewarm. Pan-fried cured meat and mooli cake (AKA turnip paste) photo had a nice crust on it, though was rather too soft inside.

Steamed dumplings were generally overcooked; the har gao (prawn dumplings) to the point where the wrappers fell apart the moment they were picked up. Spring rolls photo were filled mainly with salty, mushy, flavourless chicken. Siu mai (prawn and pork dumplings) were the most bizarre of all. Arriving late in the meal, they seemed to have been steamed, left to dry out, then steamed again; and, moreover, to have been made with terribly chewy meat in the first place. The meat in the barbecued pork pastries photo was also unpleasantly chewy.

The best thing about the meal was probably the mixed vegetables, which were nice and crisp without being underdone (the pak choi was particularly well-judged), and included interesting ingredients such as black fungus.

Kake's verdict: I wouldn't come back for dim sum. I might come back for the evening menu if I was with someone who really wanted to, since the mixed vegetables were fine and (as I understand it) Cantonese restaurants usually have different chefs for dim sum and for all the other dishes.