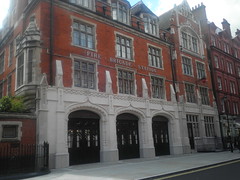 Opened in Spring 2014, Nuno Mendes's new restaurant is based in the old Victorian fire station building on Chiltern Street, Marylebone, which is set to expand into a full hotel later in the year.

The setup is quite different to Mendes' previous ventures of Bacchus and Viajante: the space is large, more polished and very busy, with a high proportion of staff to diners. The menu is a traditional a la carte setup with an emphasis on substantial meaty mains. The bar area is separated from the main dining area by a glass partition, for maximum visibility while fashionably sipping your cocktail. By 7.30pm it was crammed full of French twentysomethings in expensive-looking dresses. There's a large outdoor space in the adjoining courtyard as well, where a few patrons were enjoying their drinks while having a smoke.

On Kat and Rick's early evening (6pm) visit in April 2014, we were asked if we would like to sit at the kitchen counter. This was a great decision: we had a great view of everything and saw our starters being made right in front of us, but there was still plenty of elbow room.

The cocktail list looked interesting: Kat tried a foamy gin, lemon and saffron concoction (£10) which was absolutely delicious, light, sharp and sweet. It would have been extremely easy to spend £40 on cocktails alone! We were encouraged to choose something from the 'snack' menu to accompany our drinks — we went for the crab doughnuts (£5) to share. These were dense and rich, like a little fried bagel with a heap of crab crammed in the middle.

The octopus starter (£14) was lovely — substantial and well cooked, great flavours and texture. The Lebanese cucumber (£9) was fine, but suffered from a poor wine match (see below) which made it taste rather like a large pickle. Our mains were great however, slow roasted rib with bone marrow and hazelnut puree was delicious, and salmon with beetroot risotto was an interesting pairing and very tasty (especially the salmon crackling). Desserts were very good too: Kat's baked pear and Rick's rhubarb were pleasures to eat.

Unfortunately we found the service kind of patchy. While everyone was polite and helpful, at times it got intrusive and we felt very rushed (appetisers and 3 courses in less than 90 minutes, despite being told we had the table for 2 hours). Also, there seemed a lack of communication between the sommelier, the servers actually bringing the drinks and the food servers. As well as bad timings we were a little disappointed with the sommelier's wine recommendations. Having asked for single glasses to match our (wildly different) courses, he suggested the same wines for both of us for each course. The wines themselves were great, but were far more suited to Kat's dishes than Rick's. It seemed a bit odd that there were no go-to wine recommendations for the courses, and no by-the-glass options on the wine list itself (given the huge number of covers, there surely wouldn't be an issue getting through the bottles in an evening).

Kat's verdict: The food was superb, everything you'd expect from Mendes. At £90 per head I think it's extremely expensive though (compared to say, 3 courses + wine at St John) and the service isn't quite as seamless as they think it is. It's a lovely space to drink and dine in, but I'd hesitate to come back.