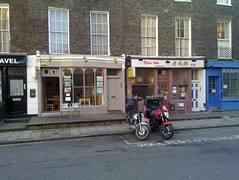 Note: Chilli Cool was refurbished in late 2011, so some of our comments below may be out of date.

It's located in a fairly studenty area and has ambience to match. One side is dedicated to Chinese hotpot, while the other serves a menu of Sichuan food. The furnishings are basic, and the seating in the rearmost of the dining areas is quite cramped (the front rooms are a bit better).

Kake has visited three times now, all in the first half of 2010. We didn't book on any of these occasions, but our party of five was seated immediately when we arrived a little before 7:30pm on a Wednesday, as was our party of two, arriving a little after 7pm on a Tuesday (though both times the place was full by the time we left, and other reviewers have mentioned having to queue for a table). On our Tuesday lunchtime visit, arriving at 12:30pm we were the only customers aside from two others who arrived after us.

Everything we tried on all three occasions was very good, with the only exceptions being the dan dan noodles (擔擔麵/dàn dàn miàn) and the fish-fragrant aubergine (魚香茄條/yú xiāng qié tiáo) — further details are below.

Crushed cucumber in garlic sauce (蒜泥黃瓜/suàn ní huáng guā; £5.80 in May 2010) photo was nicely refreshing, and enlivened by its dressing of chilli oil and Sichuan pepper. Beef and ox tripe in chilli sauce (夫妻肺片/fū qī fèi piàn; £6.90 in January 2010) photo (a cold dish) was a good rendition, with a good texture to both beef and tripe.

Perhaps the most impressive-looking dish on any of our visits was the fish with fresh chilli and chilli powder sauce (麻辣冷鍋魚/má là lěng guō yú; £15.80 in January 2010) photo, which arrived covered in a blanket of dried red chillies. This dish is less scary than it initially appears; the chillies are there to provide flavour, rather than to be eaten, and the slices of fish and cubes of tofu buried underneath proved to be perfectly-cooked, with the fish retaining its texture right through to the last slice.

Dongpo-style braised belly pork (東波肉/dōng pō ròu; £8.80 in January 2010) photo comprised a large chunk of tender, long-cooked pork in a flavourful, slightly sweet gravy. Quick-fried chicken with cumin and chilli (飄香辣子雞/piāo xiāng là zi jī; £8.80 in June 2010) photo was deftly done, not too greasy, and with plenty of flavour. Hot and chilli crispy pork intestine (香辣豬脆腸/xiāng là zhū cuì cháng; £8.80 in May 2010) photo was not entirely to Kake's taste, though bob thought it was pretty good (if less good once it got cold).

Tea tree mushrooms with cured meat (茶樹菇炒臘肉/chá shù gū chǎo là ròu; £8.80 in May 2010) photo were pleasantly chewy, and permeated with the flavour of the nicely fatty and rather bacon-like Chinese ham. Ma po tofu (麻婆豆腐/má pó dòu fu; £6.80) photo was a good example of its type.

Dry-fried green beans with minced pork (干煸四季豆/gān biān sì jì dòu; £6.80 in January 2010) photo were among the best Kake has tried; although some reviewers have complained of saltiness in this dish, we didn't think it was excessive, and the flavour and texture were both good. Mixed vegetables in white soup (耙耙菜/pá pá cài; £6.80 in May 2010) was a stew of carrots, daikon, and Chinese leaf in a thin stock with a dish of spicy oil on the side to mix in to taste photo without spices, photo with spices. This was really quite pleasant, though vegetable-loving Kake perhaps enjoyed it more than meat-loving bob.

Dan dan noodles (擔擔麵/dàn dàn miàn; £5.80 in May 2010) photo were a little bland, and less flavourful than the ones Kake and bob tried a few months previously in No. 10). Minced pork dumplings with chilli oil (紅油水餃/hóng yóu shǔi jiǎo; £5.80) photo were pleasant enough, with their slippery, silky-soft skins and modest size meaning a decent number in the portion. Steamed rice (£1.50/portion) was fine, though the five-person portion ordered in January 2010 was somewhat stingy for the number of people it was meant to serve, while the one-person portion ordered in May 2010 was huge.

As of June 2010, the entire menu is translated into English (the old one had a single Chinese-only page) — see Kake's Flickrset for photos. As well as a la carte, they also do hotpot/steamboat, though we haven't tried this yet.

On our first visit, we ended up paying £20/head for ample food and wine, including the auto-added 10% service charge. Our second visit was more expensive, since there were only two of us and so to get a good spread of dishes we ended up over-ordering. Our third visit, for lunch, worked out cheaper as we skipped the wine; £12/head this time. Service on all our visits was a slightly frustrating combination of quick/efficient and forgetful. Our orders were taken and delivered very swiftly, but they forgot to bring us tap water on the first two visits, and took forever to fill our teapot on the third despite being reminded (and they weren't busy; only two other customers). Trying to pay the bill on the second visit was also a more protracted task than it should have been.

Kake's verdict: It's kind of cheap-and-cheerful, the seats in the back room can be a bit uncomfortable, and the stairs down to the loo are kind of dangerous at times — but the food is good and I'm very likely to come back.

Accessibility: No step to get in (just a ridge), but half of the seating is down three steps at the back, and the toilets (which were lacking both loo roll and a working hand-dryer on both our visits) are down a narrow, sharply-bending, low-ceilinged staircase which is sometimes slippery with oil.