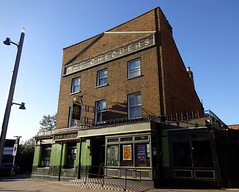 It was previously run by Antic, and the interior is still reminiscent of Antic's characteristic "shabby chic" style, albeit rather less cluttered with stuff. It has four separate areas inside, including a small, snug-like space just to the left after entering. The main bar area has a low ceiling painted dark green, with the colour echoed on the large square pillars which break up the space, and floor and furniture are dark-varnished wood; the overall feel is cosy rather than gloomy though.

To the left of the bar, down a few steps, is a long space with plenty of natural light from the large windows that run down the side of the pub. At the back is another space, amply provided with banquettes. Finally there's a part-covered beer patio with picnic benches at the side and back of the pub.

Kake and bob visited on a Monday afternoon in October 2018. There were a fair few other customers when we arrived around 4pm, most of them sitting in the lighter, brighter space to the left of the bar; we had the main bar area almost to ourselves. Music was playing, relatively interesting, perhaps a touch too loud to be ideal for conversation.

There were three real ales on, all from Cronx: Standard (£2.20/half), Kotchin, and Entire (£4.40/pint). Both half and pint were served in handled dimpled glasses.

Child-friendliness: According to a notice seen in October 2018, children are permitted until 8pm. There were a couple of school-age children in during our visit.

Accessibility: Step-free entrance via a ramp, then level to bar and some of the seating. Other seating is up one or two steps. The ladies' is up one step and the gents' is down one.