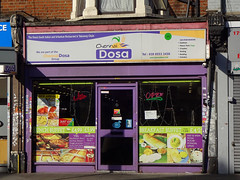 Small South Indian cafe on the High Street in East Ham. It's part of a small chain with about half a dozen branches around London.

The ambience is firmly cafe-style, with water jugs and metal cups in trays on the tables along with paper napkins in holders and cutlery (forks and spoons) in little dishes. The chairs are purple and the walls lilac, and there's a big mirror all along one wall to give the impression of lightness and airiness despite the relative narrowness of the room.

This casualness extends to the service; you don't ask for the bill at the end, just go up to the counter and pay. Kake suspects that even waiting to be seated might constitute excessive formality.

Kake visited on a Monday evening in June 2009. There were about 8-10 other customers in. Music was playing, not too loudly; it was all instrumental, a bit poppy, fairly Indian-sounding with snatches of something that sounded Western-classical-inspired.

The menu was a little confusing to me at first; the prices were so cheap that I wasn't entirely sure how many items I was supposed to order to make up a meal. I think it's basically just really cheap here in general, though.

The menu includes starters, dosas (very thin rice/lentil pancakes), rava dosas (as the previous but made with semolina), oothappam/uttappam (thick crepes with toppings baked in, sometimes described as Indian pizzas), gravies (curries), and a "tiffin" section with things like idli. They also do some kind of buffet/thali deal.

I had the mutton masala dosa, which at £4 was one of the most expensive things on the menu. The dosa itself was very thin and crisp, and the meat inside was tender without being mushy. It came in a metal tray with a small side of a soupy curry dish (I think this is called sambar) plus three chutneys, at least one of which was coconut-based. I'm not yet familiar enough with this kind of food to judge this rendition against others, but I enjoyed it.

As instructed by a sign on the wall, I ate it with my hands. (There's a sink just outside the toilet at the back of the room for handwashing before and after eating.)

I had some masala tea (80p) afterwards; it came in a little metal cup sitting in a metal bowl, with the tea residing both inside and outside the cup (apparently this is the standard way of serving a "full" tea in South India — it cools the tea down, and you're supposed to drink from the saucer and top this up from the cup). It was fine.

Service was very casual; they seemed a little surprised when I thanked them on my way out. I couldn't work out where, how, or whether to leave a tip (there's a metal bowl on the counter where you pay but I'm not tall enough to see if there was money in it or something else).

Accessibility: There's a steepish but very short ramp to get in, and then it's step-free throughout.