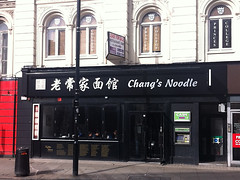 It's quite a basic space, broken up by a couple of pillars, with a bar to one side. The walls are plain, but small touches of ornamentation are here and there — a glassed-in display of porcelain in a recess on one wall, and decorative lampshades above the bar. Tables are fairly crammed in, though flanked by comfortably padded chairs. Two large tables at the back offer space for larger groups, though at the price of rather wobbly tabletops.

Kake, Sarah, bob, Martin, and others visited on a Wednesday early evening in August 2016. It was about two thirds full when we arrived around 6:15pm, but they managed to fit our party of six on one of the large tables at the back. Music was playing, not too loud.

Cold sliced pork belly with shredded cucumber (蒜泥白肉; £5.80) photo was delicious, and one of Kake's favourite dishes of the evening. The deeply-savoury sauce, spiked with black vinegar, had soaked well in to the cucumber, giving it a flavour that allowed it to overshadow even the well-varied textures of the thinly-sliced skin-on belly pork. On the other hand, garlic cucumber salad (拍黄瓜; £4.80) photo was disappointing; the garlic hadn't been given long enough to permeate the cucumber, and little other seasoning was in evidence.

Man and wife offal slices (夫妻肺片; £5.80) photo were notably spicier than our other dishes, and had a good range of textures. The tripe in particular was well-judged, cooked just soft enough but still retaining some bite.

Shredded dry tofu (香辣豆腐丝; £5.80) photo had a good texture, but the flavour was rather one-dimensional. It seemed to have been dressed simply with chilli oil, and we felt the need for a spark of sourness or saltiness. Several of our party seasoned theirs with the black vinegar supplied to go with our boiled pork dumplings, and found this improved it significantly. The dumplings themselves (手工水饺; £6.50 per dozen) photo had smooth and nicely chewy skins, and were structurally sound. The pork inside was reasonable quality with plenty of juice.

Baked buns with chopped pork (肉夹馍; £2.50 each) photo of two had a crisp exterior, and were substantial without being doughy. The filling was enlivened with a pleasing and not overwhelming quantity of chopped spring onion.

Poached fish with chillies (水煮鱼; £12.80) photo was beautifully tender, and not overcooked in the slightest. It had a nice hit of chilli and a subtle buzz of Sichuan peppercorns. Martin found this a particular highlight, though noted that if ordered with other dishes it would be a bit too much for a party of fewer than four.

Crispy fried chicken with chillies (山城辣子鸡; £8.80) photo was very dry and hard in parts, and the garlic slices included were rawer than ideal; where they could have added a sweet pungency, they instead just brought punctuations of harshness. There was a good flavour from the other seasonings though, and the crisp coating on the chicken had a good texture.

Sea-spiced aubergine (鱼香茄子; £7.80) photo was overly sweet, and the aromatics (ginger etc) should have been cooked more in the initial frying to properly bring out their flavour. Water spinach with garlic (空心菜炒蒜蓉; £7.80) photo was OK. There was plenty of minced garlic included, but the water spinach itself was perhaps just a tiny bit undercooked. Rice, on the other hand (£1.50/portion) was quite overcooked in places.

We'd wanted to try some of their skewers, which the menu suggested were available in varieties including lamb, prawn, and chicken, but the staff told us they were unavailable. Our final bill photo including a beer or two per head and the auto-added 10% service charge came to £22.50/head.

Kake's verdict: I feel we perhaps didn't order the strongest dishes on the menu; given the quality of the dumpling skins, I'd certainly like to give their noodle dishes a thorough sampling. I'd definitely come back to try more.

Child-friendliness: There were several children present on our visit; however, there were no obvious nappy-change facilities, and the state of the toilets on our visit would make Kake very reluctant to change a nappy on the floor down there. The toilets in general are quite cramped and could be difficult to deal with if supervising a small child who needed help.

Accessibility: A small step to get in. Toilets are in the basement, down a winding flight of stairs with a fairly sturdy but non-continuous handrail on one side. On our August 2016 visit the floor down there was very slippery and potentially quite dangerous to those with balance difficulties.