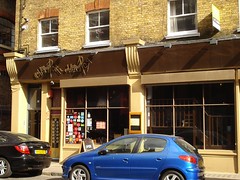 Modern Malaysian fusion restaurant in Borough, just south of London Bridge Station. Note: it had a change of management in September 2011; we haven't visited since, so our comments below may be out of date.

It's quite idiosyncratic inside; dark, cosy, and incense-filled, with unusual art (paintings, sculpture, textiles) all over the place including in the toilets.

Kake and bob visited on a Monday evening in March 2011. We hadn't booked, but they managed to find us a table despite being quite full. Service was welcoming, and we were asked as we sat down whether we had any dietary restrictions or allergies (we don't).

They don't have a true à la carte menu, but instead offer a tasting menu photo as of March 2011 and a two or three course set menu. We went for the latter, which had half a dozen options per course so still gave us plenty to ponder menu p1, menu p2.

It was quite hard to decide what to order, because almost everything looked interesting. Even the bread basket provided (at no charge) before we started photo was interesting, consisting of spiced dried tofu skin along with thick slices of nicely-textured banana bread. Canapes (also free) came next, though were less exciting; a spoonful of spicy fried chestnut and a little cracker holding a scoop of citrussy chopped avocado photo.

Kake's starter of roast chicken breast with julienne cucumber, pickled Chinese gooseberries, and sundried chilli dressing photo was almost large enough to be a main course (I gave a significant amount of it to bob for fear of getting too full). The chicken was very good for chicken breast, neither bland nor dry, and the salad was nicely spicy.

We opted to pay the £3 supplement for an intermediate granita course. Orchid tea and vanilla granita was pleasingly subtle, while the green apple and lemongrass flavour was more aggressively flavoured.

Kake's main of pan-fried black bream with turmeric, crab, and mussel curry photo was also good, with well-cooked fish and a reasonably flavourful curry sauce. The crab got a little lost — I could only find one identifiable chunk of crab meat — but I didn't miss it. Leaf salad on the side was nicely dressed. The accompanying spicy "village fried rice" was unfortunately just one flavour too many at this point; although there was nothing intrinsically wrong with it, I would really have preferred a nice bowl of plain steamed rice.

A dessert of smoked banana parfait had plenty of smoky flavour, and a pleasing texture to the flecks of banana within.

Kake's verdict: I can see this place not being to everyone's taste, but I enjoyed the overall experience and would go back. I did find the incense somewhat intrusive to begin with, but I got used to it over the course of the meal.

Accessibility: There might be a step to get in (forgot to note this down at the time). It's quite cramped inside, and it would be quite difficult to fit a wheelchair at the table we sat at, which was squeezed in by the door. It was also almost uncomfortably warm on our visit, and the incense might pose problems for some, too.