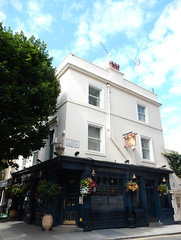 Pub in Bayswater/Notting Hill, in the Good Beer Guide.

Inside, it's all varnished wood — tables, chairs, and floorboards. A large arch leads through a beermat-bedecked wall to a small back room with two or three more tables. There are three tables on the pavement in good weather too (next to a fairly busy road), and the front windows are opened to let the breeze in. A winding flight of stairs at the back leads down to a "secret" courtyard garden.

Kake visited on a Friday lunchtime in August 2015. I arrived just after their opening time of noon, but according to one of the staff, there was some kind of problem and they opened half an hour late. I was the only person in for a short while after they opened, but by 12:45pm there were half a dozen others, and by 1pm it was more like a dozen. Music was playing, not too loud.

Three of the five handguns were on, offering Adnams Broadside, Harviestoun Afterglow, and Mad Squirrels Milk Stout. They also had keg taps for things including Brooklyn Lager, Meantime Amarillo Amber, Stiegl Weisse, BrewDog Hop Fiction, and Odell Loose Leaf, as well as a list of craft bottles and cans photo. A pint of lime and soda was free!

According to a sign outside in August 2015, food is served noon-10pm, presumably every day. Kake's flatbread with pig's cheek, capers, and mozzarella (£7.50) photo was rather less interesting than it sounded on the menu, and fairly disappointing in itself. The flatbread was a pizza base style, and browned rather too much around the edges. The pig's cheek itself was fine, with a decent flavour and nicely crisped in places, but rather sparse in comparison to all the cheese. They seemed to have forgotten to add the capers, but a few sprigs of watercress had been dumped on top to wilt. A knife and fork were supplied, but luckily superfluous, as the knife was far too blunt to cut through the flatbread.

According to a sign outside in August 2015 photo, there's live music every Saturday from 9pm.

On a october 2018 visit a pint of heart and soul was £4.95 with ghost ship, sharps crossheart and dark island also on. Full of people having Sunday roast with several tables reserved. Music playing quite loudly which was encouraging everyone to talk loudly.

Accessibility: A step to get in at both entrances. Step-free through to RADAR-locked accessible toilet with pull-down baby change once you're in, also step-free to ladies'. A flight of steps with at least one bend in it to the gents' and the courtyard garden.