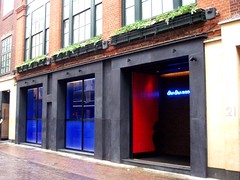 Budget Chinese food venture in Soho by Alan Yau, the restaurateur behind Wagamama and Busaba Eathai, amongst others.

In the Soho branch, the arrangement of the dining area follows the usual pattern of long benches with diners fitted on to these. The open kitchen is at the front of the restaurant, and the back opens out on to Kingly Court with large windows letting in light. There is a rack for coats at the side of the room.

Ewan and Bec visited for lunch during the first week it was open (May 2008); the place was largely empty upon arrival but gradually filled until fairly full by around 1pm.

Ewan had the enoki lamian, a very tasty dish with thin noodles and tiny enoki mushrooms, full of flavour. Bec's tofu & aubergine lao mein was less successful: the noodles weren't quite so good and there were reservations about whether fish/oyster-based sauce had been used (the waiter assured us it was completely vegetarian). However, they were happy to remove the mushrooms from it, though this meant it took a fair bit longer than the other dishes to arrive. Alice was also a little disappointed by the chicken in her jasmine tea smoked chicken noodle main course, as being slightly pink.

However, the sides were all uniformly excellent. The spring onion pancake was extremely tasty, not oily on the outside, though it did drip a bit. Garlic Chinese chives were lovely as well, very easy to eat, and the prawn guotie dumplings were given an enthusiastic thumbs up.

Their drinks menu includes cocktails (alcoholic and non-alcoholic), as well as an esoteric range of drinks, many from the San Pellegrino range, such as Chinotto (an acidic bitter drink like Campari without alcohol, £1.70) and San bitter (likewise with a tart taste and in a smaller bottle, £1.50), but both very good. Our waiter had trouble explaining what they were to us, and brought two bottles of Chinotto out of error (though they were happy to let us keep the second without charge when we explained the mistake).

In all, good but not exceptional food. It will be interesting to see how it develops and worth returning to try again after they've settled in, perhaps.