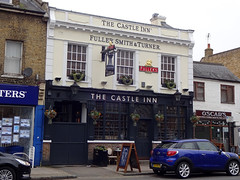 Entry is into a reasonably-sized space with a long bar running down one side. Leaded windows at the front let in a fair amount of natural light, especially for the tall banquettes curving around to either side of the door. There's plenty of normal-height seating too, though, including a couple of armchairs. Flooring is a mix of wood and large worn flagstones.

At the back is a raised seating area, offering a slightly cosier feel due to being separated by large square pillars from the rest of the space. Seating here is a mix of banquette and mismatched upright chairs, while the walls are divided between exposed brickwork and wood panelling. A fireplace, possibly partly original, has interestingly ornate patterned tiles. Beyond this is some sort of beer garden, accessed via a side door.

Kake visited on a Monday morning in January 2019. Arriving at their opening time of 11am, I was the only customer. Peaceful music was playing quietly. Service was helpful and welcoming.

The five handpumps were clipped for London Pride and Dark Star Hophead, with Fuller's Off Piste IPA marked as coming soon. A pint of lime and soda was £1.60.

They serve food, which as of January 2019 seems to be mostly burgers photo of menu.

Accessibility: A large step to get in. Another step to the seating at the back, though there's plenty of normal-height seating on the level. Once you're in, there's no further steps to the toilets, including an accessible one. (Older reviews state that you need to go outside to get to the toilets, but there's now a glass roof over that bit.)