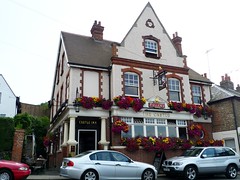 Inside, it's divided into a number of areas, each with a slightly different feel, including a rather dark room at the back which seems to be set up mainly for diners. There's also some outdoor seating along the side of the pub.

Kake visited on a Wednesday lunchtime in September 2009. They had four Fuller's ales on handpull — HSB, ESB, Discovery (£1.45/half), and London Pride — as well as Honeydew on tap. Lime and soda was 80p/pint. When I arrived around 2pm, there were around 10 or so people in, some having lunch, some sitting with a pint and the paper. No music was playing, and I didn't see any TVs. TVs would feel out of place here, anyway; the ambience was pretty much exactly as I'd expected from my brief wander through the rather posh-villagey Harrow-on-the-Hill.

Food is served until 9pm every day, according to the 2010 Good Beer Guide. The menu photo as of September 2009 includes both traditional pub food and lighter, saladier dishes. In September 2009, Kake tried the tuna nicoise style salad (£10) photo. The tuna was a bit overcooked for my taste, and quite dry around the edges, though the char on the outside had a decent flavour. The salad was better, with some very nice olives, crunchy red peppers, crisp green beans, and a decent dressing that clearly didn't come from a bottle.

In April 2011, bob had the burger and chips (£8.75) photo. The burger was made from decent meat and had a nice char to it. The cheese on top was a decent bit of Cheddar. The chips were OK but nothing special.

Accessibility: It's located on a steep hill. Two high steps up to get in, but it's on one level once you're inside. There's a RADAR-locked accessible toilet.