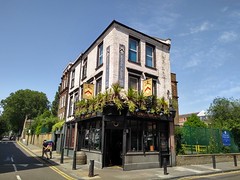 A lovely restored pub in Bethnal Green, not far from Shoreditch.

This, as many accounts attest, was a pub intimately linked with the Kray twins in the middle part of the 20th century (a small painting of them in the pub references this), in an area which still boasts many crumbling facades and derelict sites, but increasingly overtaken by the designer shops spreading from Shoreditch. Having been closed for a while the pub was reopened in 2007.

Outside, some of the original signage remains, and the frosted windows allow only discreet glimpses in. However, it's quite different inside, beautifully restored, and a great range of beers, wines and spirits. There is a main room with a couple of large tables alongside the bar, and some other tables at the front. A few more seats in the corridor towards the back, and then a smaller room next to a little beer garden, in each of which a few tables are laid out.

We've visited several times now, most recently in June 2019. On Ewan's Sunday evening visit in April 2008 the atmophere was relaxed, with music playing quietly. Considering the proximity to Shoreditch, there was no sense of exclusivity or fashion-based prejudice, and both bar staff and customers were friendly. When bob visited on a Saturday afternoon in June 2019 there were only a few customers in at 3pm.

The ales on handpull on visits in 2008 and 2009 were Adnams Bitter, Adnams Oyster Stout, and a well-kept Timothy Taylor Landlord (£3/pint); they also had Aspall cider, as well as Bitburger (£3.30/pint), Licher Weizen, San Miguel, Meantime Pale Ale, and a few other draught lagers. They appeared to have a particularly good selection of whiskies and plenty of bottled beers, as well as an extensive wine list chalked out on a board. In June 2019 the real ales were Sharp's Doom Bar and Timothy Taylor Landlord (a fairly shocking £6/pint), and they also had a large range of Beaverton beers on keg.

In August 2008, Ewan and Jo found the chips (£2.80) to be excellent: thin and hand-cut, served with mayonnaise and ketchup on the side. The mixed salad (£2.90) was likewise very nice, with a simple dressing and well-presented, and not overwhelmed by lettuce. The French cheese board (£6.50) presented five different cheese (a goat's cheese, a brie, two harder cheeses, and a blue cheese), along with some slices of pear and a bowl of crusty French bread and butter, of a good quality.

They have free WiFi.