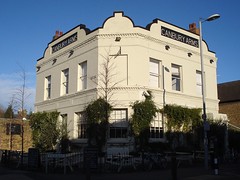 Note: It saw an extensive closure and change of management from mid-2018, but reopened in March 2019 under the ownership of Pearmain Pub Co and was then sold to Young's in March 2020. The comments below predate this takeover, and hence some or all of the details may be out of date.

The decor is very bare, with exposed floorboards and wooden tables, and it's quite obviously a gastropub. A piano sits in one corner. A couple of what may initially appear to be open fires seem from the pipework to actually be gas. There's a marquee/conservatory-style extension to one side, with an adjoining courtyard space (this can be booked out for functions).

Despite the gastro-ness, there are five handpumps on the bar. In February 2008 they had HSB, Doom Bar, Sussex Best, Scrum Down, and Landlord. In December 2011 they had Hogs Back TEA, Surrey Hills Ranmore, Timothy Taylor Landlord, St Austell Tribute, and one other (possibly from Otter brewery), as well as a couple of ciders (Stowford Press and Aspalls). In November 2015 they had four ales including Surrey Hills Ranmore again (now £4.20/pint). In March 2016 Ranmore had risen to £4.50/pint.

When Kake visited on a Wednesday lunchtime in December 2011, a member of staff stopped me as I was entering and warned me that most of the tables were booked due to proximity of Christmas; however he managed to find me a small table to sit at. I was probably lucky that I got there relatively early (a little before noon), since the place did fill up during my visit.

According to the Canbury Arms website as of June 2012, food is served noon-3pm and 5pm-10pm Mon-Fri, noon-10pm Sat, and noon-9pm Sun. The menu is quite interesting, and there's a specials board too; see Kake's photoset including menu photos.

In December 2011, Kake tried one of the lunch specials, pork hash with fried egg (£5) photo. This was very good for the price; a generous portion of both meat and vegetables, a rich onion gravy in the bottom of the plate, and a nicely runny yolk on the fried egg. I detected parsnip and carrot as well as potato, and the meat was a mixture of sausage and pork cuts, possibly also a bit of bacon. The vegetables were a bit haphazardly cut, leading to different levels of done-ness, and it wasn't clear whether this was on purpose. I'd happily order this again though. Ketchup was provided in a kilner jar, and tap water in a swingtop bottle. No service charge was added, though, and I ordered and paid for my food at the bar.

Child-friendliness: Children under 8 are welcome until 7:30pm, and older children later. The child-friendliness policy is usefully made very explicit, with a full page of explanation in the menu photo and transcript, and they also have a separate children's menu photo and transcript. One of the cubicles in the ladies' has a pull-down baby changing table and a nappy bin.

Accessibility: A step to get in at both entrances.