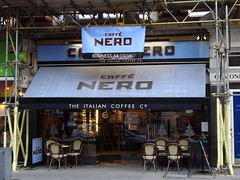 A branch of the Caffe Nero coffee chain on Southampton Row in Holborn. It does BT Openzone Wifi at some cost. It also closes considerably earlier than the other coffee shops around.

secretlondon visited one Sunday in December 2008. I had a large amaretto latte and a slice of chocolate cheesecake. I had to rush my coffee to get out by 5pm, and felt pressured into leaving at closing time.