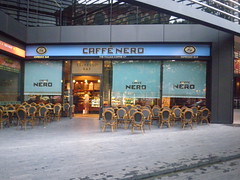 Branch of the coffee chain in More London off Tooley Street near London Bridge Station.

It has lots of outside seating but I don't know if you could smoke there. The Tooley Street area has a bit of an anti-smoker vibe and some people seem to instantly complain if colleagues smoke almost anywhere in the area. As it is private land in More London I reckon you'd get hassled.

I have no idea if there are toilets.

Bec stopped by July 2013 and can confirm a step-free WC for customers.