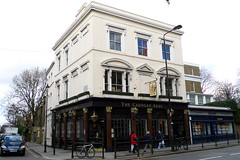 Gastropub on the King's Road in Chelsea. Prior to December 2008, it was a decent, unpretentious boozer; it was then acquired by the ETM Group and closed for refurbishment. It reopened as a gastropub in April 2009.

Post-refurb, it's divided into two parts, with the lighter, airier front section dedicated to drinking (four largish tables, and a couple of leather couches), and the cosier back section laid with cutlery and napkins for dining. There's also a bookable function room upstairs, which a sign seen in April 2009 indicated was free to hire (though there's a minimum spend). As of February 2010, the upstairs 'Billiards Room' has three pool tables.

Kake visited on a Wednesday afternoon in late April 2009, shortly after the refurb. Although the inside was finished and decorated, they were still painting the outside — but a sign on the door assured potential customers that they were open for business. Music was playing (ska).

Four handpulls dispense real ale, with Adnam's Bitter (£1.70/half), Adnam's Broadside, and London Pride. On a visit in February 2010, Adnam's still dominated the pumps (Broadside, £3.40/pint, and Lighthouse) along with Pride. They also have Tiger lager on draught along with a number of other basics.

Accessibility: One step up to get in, one more step down to the restaurant area, and toilets are up a flight of stairs. The toilet cubicles are also quite hard to actually get into, at least in the ladies'.