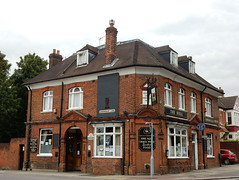 It's divided into two halves, corresponding to the old-fashioned division into public and saloon bars, though there's no indication from the outside of which is which. On the right as you go in is the "public bar", with a fruit machine, pool table, dartboard, and at least one flatscreen.

The "saloon bar" on the other side is cosier and more peaceful, with very traditional decor — patterned carpet, dark red curtains drawn aside with tie-backs, upholstered banquettes, and half a dozen stools huddled around the semicircular bar. Old pump clips decorate the bar gantry and the surrounds of the frosted windows by the entrance. A door leads out to a spacious but rather basic beer garden, part grassed, part covered.

Kake visited on a Friday afternoon in September 2015. I was the only customer when I arrived a little after 2pm, but two more turned up a quarter of an hour later. No music was playing, though the flatscreen or perhaps a radio was on in the public bar, just barely audible from the saloon side.

The three handpumps in the public bar were unclipped, but the real ales available were listed on a chalkboard above the bar, and five of the seven handpumps in the saloon side were clipped for Bath Ales Gem (£1.70/half), Sharp's Doom Bar, Castle Rock Harvest, Courage Best, and Exmoor Ale. The Gem was very fresh-tasting.

There's free WiFi via The Cloud (requires registration, but doesn't seem to validate the information you provide).

Accessibility: A step to get in at both sides. No further steps to the toilets once you're in.