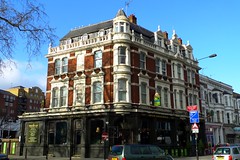 Young's pub and hotel a short walk from Hammersmith Station.

On Martin's visit in June 2007, the menu had a lot more options than were listed on the website. (The website prices appeared to be accurate for the dishes shown.) The "21 day aged Scotch rib-eye steak" (£12.90) was excellent (cooked as requested, with a very tasty peppercorn sauce), as was the "sauteed cornfed chicken" in "mushroom, garlic and herb cream sauce" (£10). The quality and standard of presentation of the food both seemed to be aiming for the "hotel" rather than "pub" level. Considering the number of places that charge £11 or so for an overcooked piece of low-quality steak, £13 did not seem unreasonable for the quality of this offering. Beer was standard Young's fare, but was well kept.