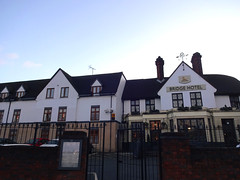 Young's pub and hotel in Greenford.

The original part of the premises is relatively compact, containing the lobby, bar, and dining room in a pleasantly-characterful building. A huge modern extension to one side is sympathetic in external appearance, and provides an impressive 68 bedrooms.

The main entrance opens onto the lobby, with a reception desk to one side and seating to the other. Straight ahead is the dining room, and off to one side is the bar. Floors are varnished wood, walls are half-panelled, and vintage photos (with little or no obvious connection to the hotel or local area) hang here and there.

According to their website as of January 2018, food is served at breakfast, lunch, and dinner time seven days a week.

Kake visited for breakfast on a Thursday morning in December 2017. There were three other breakfasters when I arrived around 8:15am, and others were in and out while I was there, seemingly mostly guests at the hotel. A morning TV show was playing on a flatscreen with the sound on.

A continental breakfast was set out on sideboards, including orange juice, a pot of filter coffee, and standard catering-pack teabags with a hot water dispenser. (The tea was priced on the menu at £2.35, but they didn't charge me for the two self-serve mugs I had "because it's Christmas".)

I went for the smoked salmon and scrambled eggs on a muffin (£9) photo. This looked a little basic when it arrived, but was fine. The eggs were cooked through but soft, not dry. There was plenty of smoked salmon, though its flavour was a little bitter. The muffin had a good flavour and was properly toasted.

Service was friendly and welcoming. No service charge was added to the bill, though there was space left for me to add one.

Accessibility: Step-free access via a ramp with a bend in the middle, and step-free to toilets once you're in. The hotel has its own car park, which presumably could also be used by pub customers.