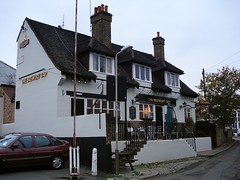 Nice little Fuller's pub down a side street in Brentford.

Note: According to the Feb/Mar 2020 London Drinker, the Brewery Tap reopened in December 2019 after "a sympathetic refurbishment". We haven't visited since, and so some or all of the details below may be out of date.

The 2008 Good Beer Guide says you should book for Sunday lunch, since lunches are popular. It also says that food is served noon until 7:30pm weekdays (noon-3pm on Saturday and 12:45pm-3pm on Sunday, according to the Fuller's website). A blackboard seen outside in October 2007 advertised home-made steak and ale pie (with mash or chips, and peas or carrots) for £4.50.

They seem to do a lot of live music; there's a piano inside, and lots of posters advertising live jazz.

Kake visited on a Friday afternoon in October 2007; there were a few regulars at the bar in the front room, and a few others in the back bar. No piped music. Service friendly enough, and they offered me a taste of the guest beer before I bought some. The guest beer was Tom Woods Hop and Glory (£1.35/half pint), and they also had Pride, Chiswick, and Discovery.

Pool table in a separate room. A few tables and chairs out the front, and a few more on a patio out the back.