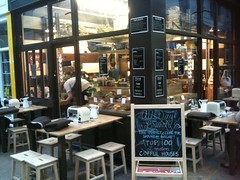 Bakery and cafe in Brixton Village (the arcade formerly known as Granville), which has the novel feature that you are allowed to make your own toast. There's also another branch, the original, in Clapham.

The small corner venue in the arcade is entirely occupied by the cooking equipment and staff, with no room for customers (except to allow them to collect jam and spreads for the toast), so all the seating is at tables in the arcade avenues. Since that space is a little chilly in the winter months, blankets are provided for thinner blooded customers photo.

DIY toast is on offer between 9ish and 1ish, according to signs in the windows as of February 2011: £2.50 for four slices of wheat bread, £3.50 for rye photo. Customers are provided with butter and spreads (Tiptree jams, Marmite, Nutella, etc) and left to use the large Dualit toasters provided on each table at their own convenience. On Sundays they serve an all day brunch photo of brunch menu as of February 2011, with a range of items from eggs or beans at £1.50 each to fruit salad and yoghurt at £4. 2lb loaves of bread start at £2.25 for a standard wheat loaf, with speciality loaves at £2.75 or £2.95; a selection of cakes and biscuits are also available (e.g. Anzac biscuits at 80p each).

On a February 2011 visit on a Sunday afternoon shortly after 1pm (but still 1ish enough for toast), itsbruce and Jen tried the DIY wheat toast option with some brunch extras. The freshly cut bread included two slices of white, one brown and one from an olive loaf. All the bread was good but the olive loaf was exceptional and needed no topping. The toast would have made a decent breakfast in itself, but it was our first meal of the day, so we were glad when the brunch extras arrived while we were still halfway through making our toast. itsbruce had sausage (£2) and tomatoes (£1.50). The premium quality pork sausage was nicely cooked and worth the money; the three small halves of raw tomato were not. Jen also had sausage, only with beans (£1.50), which were a generous serving of freshly cooked cannellini beans in what itsbruce thought was a rather watery tomato sauce. The total bill, including coffee and tea photo of drinks menu as of February 2011, came to £16.

Service was very friendly and helpful; we were asked right at the start if we had any allergies or food intolerances. The staff also asked just how strong we wanted the coffee, which was made from beans freshly roasted on the premises, and they were keen for feedback about the quality (good).

Their Clapham outlet is apparently run on the same principles but is larger and has a more extensive menu; see Time Out review.

itsbruce's verdict: making your own toast to your own preference and your own timetable, using good bread and a non-nonsense toaster, is hard to beat.