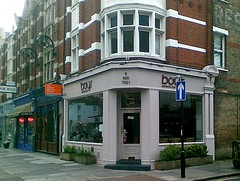 Thai restaurant on Chiswick High Road. The decor is smart, modern, and clean; wooden floors, black tables, wooden chairs. There's seating for about 40 people. According to their website, they also do takeaway (and delivery).

Bob first visited on a Thursday lunchtime in March 2008. I was the only customer apart from a group of three. I ordered from the set lunch menu photo, which gave me two courses for £8. I chose spring rolls to start, followed by pad kra prow chicken with rice; it was all served together on the same plate photo. They asked how hot I wanted it, on a scale of 1 to 10; I chose 8. It ended up being pleasingly hot, though I could have taken hotter (however it would probably have been quite hot enough for the average British palate). Service was friendly and helpful enough.

Bob visited again on a Tuesday lunchtime in July 2008. This time there were no other customers at all. The lunch special no longer seemed to be available, so I ordered a la carte (for a total of £22 all in all, which is quite a lot). I started with moo ping (pork skewers; £5); very good, neither overcooked nor dry photo. My main was beef penang (£7), which was again very good photo. The steamed rice (£2) was also notably good, as was the Thai iced tea (which came with star-shaped ice cubes photo). Dessert was banana fritter with ice cream (£5).

Bob's verdict: Although the food is good, I wouldn't necessarily go back, especially for lunch, since it's a bit expensive to go a la carte and there are other much cheaper Thai places in Chiswick.