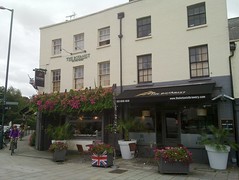 It was previously owned by Convivial London Pubs, but as of late 2013 it's owned by Mitchells & Butlers and part of their Castle sub-brand. Also previously a brewpub, but according to the Dec 2013/Jan 2014 London Drinker magazine, they ceased brewing at the start of November 2013, following the M&B takeover.

bob visited on a Monday afternoon/evening in September 2012. There were four real ales on, all from their own brewery: OK Bitter (£3.50/pint), Three Nine One, Maximus, Q Gold, and Queen Charlotte. They also had Nemophila (£3.60/pint), a kegged stout. A bottle of Crabbies was £4.55. All of the beers were OK, but nothing stood out. They also had a range of domestic and foreign bottled beers.

The pub is a collection of interconnected rooms. We sat in a relatively secluded one with some big sofas before moving to a more conventional table when our food had arrived. It was quite quiet the entire time.

Essex duck leg with mash and green beans (£11) was very tasty. The burger with cheese and bacon (£11) photo looked very good as well.