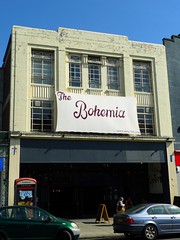 A pub in North Finchley.

Originally a Firkin pub and then an O'Neill's, this pub was taken over, rebranded and refurbished by Antic Ltd in 2012. It closed in August 2013, but was reopened on 11 June 2014 acquired by the people behind the Bull in Highgate. The information below predates the change of ownership (though the Twitter feed notes there's a pub quiz on Tuesdays).

Inside, the pub extends back quite some way in a large high-ceilinged rectangular space, broken up by some interior partitions and large heavy curtains photo. The usual mismatched furniture is in the Antic house style, with random fittings (cabinets, bookshelves, anglepoise lamps) breaking up the space. The largest area is to the rear near the bar, where tables nestle alongside large plush leather couches and banquettes photo.

The bar features plenty of options photo. There are two banks of ales, each with four handpulls. Sharp's Doom Bar and Timothy Taylor's Landlord are joined by favoured breweries like Thornbridge, Buxton, Windsor & Eton and more local brewers. On an April 2013 visit, Ewan had a Bath Ales Special, which was perfectly decent. There are the usual keg options, nothing particularly surprising, and a good bottle selection.

There's a shortish food menu on offer, but good quality.

Accessibility: There's no step to get in, but the toilets are up some stairs to the rear of the building.