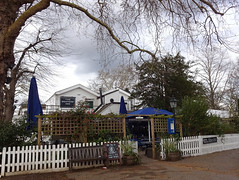 Pub on the river in Kingston.

Inside, there's a low ceiling, bare floorboards, and old photos of Kingston on the walls. It has a fair bit of outside seating too (unsurprising, given the location) — a large, part-covered beer garden with lots of picnic tables and a (somewhat obscured) view onto the river.

Kake visited on a Thursday afternoon in September 2009. Five real ales were available: Dark Star Sunburst, York Guzzler (£1.50/half), Isle of Purbeck Fossil Fuel, Pilgrim Progress, and Pilgrim Templar. They also had three polypins behind the bar, one of which at least contained cider.

Kake and Shuri visited again on a Wednesday afternoon in March 2016. There were a few other people in when we arrived around 4:30pm, but quite sparsely spread around the place. Two competing sets of music were playing on slightly inadequate speakers, which was a little annoying (one was possibly coming from the kitchen).

Three of the handpumps were clipped, for Sambrook Red Ale, Belhaven Grand Slam, and Windsor & Eton Guardsman. They also had keg taps for London-brewed beers including Battersea Rye and IPA, and Portobello London Lager. A pot of tea and a pint of lime and soda came to £5.35. Service was enthusiastic and helpful.

According to an advert in the Dec 2011/Jan 2012 issue of London Drinker, food is served noon-10pm Mon-Sat and noon-9:30pm Sun. It looks quite interesting photo of menu as of September 2009.

Also according to the abovementioned advert, they have live jazz every Sunday from 8:30pm.

Accessibility: Step-free entrance via the beer garden. Once you're in, it's level to the toilets (acessible, ladies', and gents'), bar, and some of the seating area. The dining area is on a dais though.