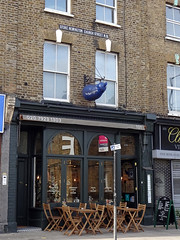 The front part seats about 20 at a combination of square wooden tables and circular tables with mosaic tops. Not much light gets in through the front window, due to all the plants in the way. There's another seating area out the back, which is better-lit.

At the Blue Legume, you don't order at your table. You first scout out someplace to sit and secure it. You then queue up on either side of the central service area, place your order and pay. There are no visible table numbers, but the staff seem to be able to find you most of the time when you tell them where you're sitting. But not always.

Kake visited on a Tuesday morning in December 2008. When I arrived a little before 10am, there were (perhaps unsurprisingly) only two other customers, though another couple arrived while I was there.

I had the eggs benedict (£5) photo, since I'd read a few reviews raving about them. Unfortunately I was disappointed. One of my eggs was overcooked, with the yolk solid all the way through, and the other was undercooked, with the yolk and even part of the white being liquid enough that it spilled all over the plate at the mere prod of a knife. The muffin was uninteresting and a bit too sweet. The hollandaise sauce was fine, though, with a distinct but not unpleasant vinegar flavour, and the ham was thickly cut and generously portioned. Along with a glass of perfectly good freshly-squeezed orange juice and a pot of English breakfast tea, the final bill was £8.20. No service charge was added, but there's a tip jar on the counter.

Allolex or his girlfriend always orders the Eggs Benedict (which can be inconsistent, as noted by Kake), usually accompanied by a goat's cheese salad (a whole baked goat's cheese on top of salad) and chips with garlic mayonnaise. Everything comes with chives on it, for some reason. They have also tried the full breakfast with chicken sausage (very nice), the quiche (good), various sandwiches (usually excellent), and the hamburgers (give them a pass if you don't like people mucking around with your patty).

The Blue Legume only accept cash at the weekends due to the sheer number of customers and the shortage of terminals. During the week, they take normal chip cards.

Accessibility: One step up to get in. Another step to get to the ladies', and the gents' is down a flight of stairs.