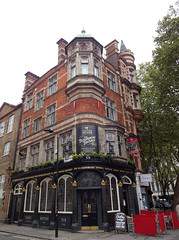 A small, basic boozer, serving well-kept Shepherd Neame beers, always including one seasonal brew, at the southern edge of Bloomsbury.

There's limited seating downstairs but there's another small room upstairs with seating for about 25 people; this can be booked for private parties. There's also some pavement seating outside on New Oxford Street.

Kake, Ewan, Sarah, and others visited on a Wednesday early evening in March 2015. Three of the four handpumps were on, all with Shepherd Neame ales: Whitstable Bay, Master Brew, and the seasonal Early Bird. A pint of Early Bird and a glass (slightly less than a pint) of lime and soda came to £5.80.

Music was playing, not too loud. There were tables free when we arrived a little after 5pm, but the place was quite full by 6pm.

Food is served lunchtimes and afternoons only (on our March 2015 visit they started removing menus from the tables around 6pm). It's fairly standard pub food from a short menu photo of menu as of March 2015, though they also do daily specials.

Accessibility: The main bar is up a small step from the street, but the doorway is probably too narrow for a wheelchair. Gents' toilets are in the basement and ladies' are on the first floor, with no lifts to either. The stairs are quite steep.