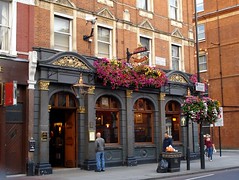 It has a front bar area, and a dining area out the back which in the evening often has tables reserved for diners (not specific diners, but you can only sit at those tables if you're eating).

Kake first visited on a Monday early evening in September 2008. Most of the seats were taken, but I managed to find a stool at a small table. All four Fuller's were on — Pride, Chiswick, Discovery, ESB — and I had a half of Discovery, which was fine.

Kake and bob visited again on a Wednesday evening in September 2009. The same four ales were on. Discovery was £3.25/pint and Pride was £3.20/pint.

Accessibility: Step up to get in, and toilets are down a narrow, winding staircase.