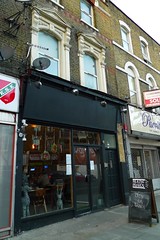 A small tapas restaurant on the High Street in Stoke Newington, opened in summer 2012.

Kat and Rick visited on an early Wednesday evening in September 2012, just as the restaurant opened at 7pm. We hadn't booked but several other groups of people had — by 8pm the small room was about three-quarters full. There is a large picture of a black pig wearing some pearls on the wall, which led us to wonder if this inspired the restaurant name or vice versa. There are also stylised metal cow heads on the walls, confusingly also wearing pearls despite not being pigs.

The menu offers sharing platters as well as tapas dishes, and the staff were happy to explain the Spanish terms we didn't know. We opted to share five dishes plus a basket of bread rubbed with tomatoes (a refreshing change). Iberican Ribs (£7.50 for a plate of five) were juicy, large and nicely salty. Spanish meatballs in a veg stew were fine. Kat's highlights were the cold roasted vegetables on toast, morcilla balls (small but excellent), and the lovely creamy croquettes.

Wine is served in shallow tumblers; a lovely glass of Navarro was £4.50. There is a separate sherry list.

The website is currently 'a work in progress' — be warned that it plays music, which I can't work out how to turn off.