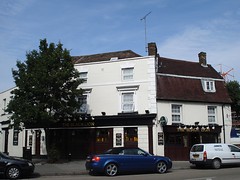 Inside, it's divided into three areas; the main seating area running along the bar, a smaller area down a couple of steps to one side, and a quieter back bar with its own entrance. A large beer garden is accessed via the back bar.

Decor is quite traditional. The main bar and back bar have blackboards showing which real ales are on.

Kake visited on a sunny Wednesday afternoon in August 2008. Beers available were Archers One For The Road (£2.90), Adnams Bitter, and Broadside. The Archers was quite sour-tasting, but in a way that seemed as though it was meant to be like this (they did offer me a taster before I bought it, but I decided to just go for a pint straight off, so it's my own fault that I didn't like it). Crisps (Tavern Snacks) were 50p. The TV in the main bar was showing some sort of sport (horseracing? It was faintly audible but not visible from where I was sitting). There were maybe ten other customers in, in small groups.

On Kake's second visit on a Wednesday early evening in March 2010, there were five real ales on including Kew Gold (£3.20/pint), Deuchars IPA, Courage Best, and Adnams Broadside. The place was quite lively, with quite a few people in at 5:30pm.

On a visit in January 2012, the beers on were Mighty Oak Maldon Gold, Sharps Doom Bar, Theakston's Black Bull, Cheddar Ales Ironworks and courage Best. Live football and horse-racing were being shown on televisions. There was, regrettably, a pervasive unpleasant smell.