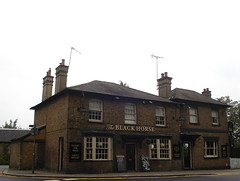 It reopened in November 2012 after a period of closure and a comprehensive refurbishment, and is now under the management of Oak Taverns. It has its own microbrewery (the Barnet Brewery) and a reasonably-sized garden with grass and a patio area.

It's not large inside, but the space has been divided into distinct areas with different ambience. Entry is into the bar area, with a small amount of seating and a couple of stools at the bar. To the side is a light, bright space with large square tables, leading out to the garden through a pair of patio doors. Finally, around the other side of the bar is a dining area set with wine glasses. The decor is subtle, in tones of grey and brown.

Kake visited on a Thursday lunchtime in September 2014. There were 7 or 8 other customers in, some of them having lunch. Rock music was playing, not very loud.

According to the Black Horse website as of September 2014, food is served noon-3pm and 6pm-10pm Mon-Fri, noon-10pm Sat, and noon-8pm Sun. Kake tried the vegetable and halloumi kebab (£11.50) photo, which was definitely above average for pub food. The vegetables (courgette, aubergine, and green and yellow peppers) were very nicely charred, and well-seasoned, though the aubergine was possibly a touch too oily. The couscous it came with was chilled, and would perhaps have been better hot. It was quite sweet too, and studded with raisins and sultanas to add more sweetness; though the sweetness did set off the saltiness of the halloumi, so this was perhaps on purpose. The pitta bread was warm and fresh. The salad was also fresh, with a decent enough dressing.

According to a board outside in September 2014, there's a quiz night every Wednesday.

Child-friendliness: There's a baby change table in the accessible toilet, and the pub has at least three highchairs. There were a couple of babies in on our September 2014 visit.

Accessibility: A small step in at the left entrance (larger step at the right entrance). Accessible toilet on same level with a baby change table. No steps to other toilets either, and the ladies' has a cubicle with grab bars and a door that opens outwards.