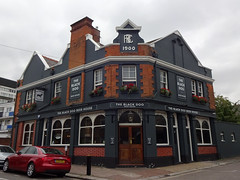 Located on the corner of two backstreets, it has large windows on two sides to let the light in, attractively finished with arched tops and stained glass detailing. Inside, an L-shaped seating area runs around a long wooden bar with three banks of handpumps as well as several keg taps set into a bare-brick bar back. A door to one side leads out to a garden.

Scuffed dark-varnished wooden boards are underfoot, walls are a mix of brickwork and wood panelling, and seating is provided by padded banquettes and freestanding bentwood chairs.

Kake visited on a Monday lunchtime in September 2019. There were two other customers when I arrived around 12:30pm, and several others turned up while I was there; by 1pm there were around two dozen of us. A James Brown LP was playing quietly, and there was a good buzz of conversation.

According to the Black Dog Beer House website as of September 2019, food is served noon-2:45pm and 5:30pm-9:15pm Mon-Fri, noon-9:15pm Sat, and noon-7:45pm Sun. The main menu is substantially more interesting than the usual pub food options, and they also have a long list of premium tinned fish and pates served as bar snacks.

Kake tried the one main-course vegan option: rice and wakame stuffed cabbage roll with miso roasted king oyster mushrooms, similarly-roasted tofu, avocado, cucumber, and ponzu dressing (£13) photo. The cabbage rolls had a good flavour, but cabbage and rice were both quite soft and soggy. The mushrooms were great, with plenty of flavour and a substantial chewy texture. Even the tofu tasted of something. Toasted buckwheat sprinkled on top added crunch and flavour while also reflecting the Eastern European origin of the cabbage rolls. The avocado was fine, though didn't really seem to go with the rest of it. Overall, the dish was pushing up against the line of incoherence, but not quite crossing it.

Child-friendliness: According to the Black Dog Beer House website as of September 2019, under-18s are permitted until 8:30pm but they explicitly don't offer a children's menu. There were eight babies present on our visit, in two separate groups. They have at least three highchairs (the type with no tray and very little back support). There's a pull-down baby change table in the ladies' toilet (gents' not checked).

Accessibility: A large step to get in. Another step to the ladies' (inside the door separating it from the rest of the pub).