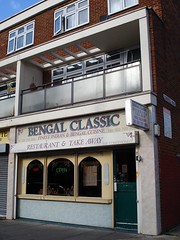 The Bengal Classic is one of two Indian restaurants on Pennyfields, near Westferry Station on the DLR. It offers a standard menu.

Standard menu with drinks comes to about £15 per head as of April 2008. They will cook a "phal" to order.

They also offer takeaway and delivery.

LoopZilla's verdict: It has high standards of food preparation and waiting. Large groups can feel confident that they will get exactly what they ordered.