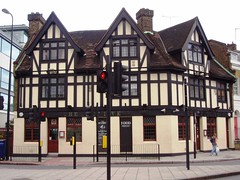 Pub near the Oval which has an old exterior but a modern interior.

bob visited during an early evening on a Thursday in September 2009. The pub was already quite busy but finding a seat wasn't a problem.

There were a few TVs showing the women's football World Cup final, and a mixture of tables with normal chairs and modern sofas.

I had an okay pint of Young's ordinary (£3); they also had Pride on.