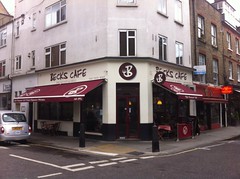 British cafe on Red Lion Street in Holborn. It seats about 30 in a canteen style arrangement.

bob has been visiting regularly since May 2013. On my first visit I had a Big Breaky (£8) photo which consisted of some very good eggs, some tasty bacon, some really quite good sausages for a cafe, decent black pudding, well done mushrooms, and curly fries. It came with bread or toast; I chose toast, which was made with crusty bread. It also comes with free tea or coffee but I had a bottle of water (which I was charged extra for).

On a return visit the same month I had the Mega Breakfast (£8.50) photo which was basically the same as the Big Breaky but with hash browns instead of curly fries and added grilled tomatoes. This was also very good.

bob's verdict: Really good. While the breakfasts seem quite expensive for a greasy spoon type breakfast, they are probably worth it given the quality of the ingredients. I go at least once a fortnight.

Accessibility: Can't remember if there's a step to get in. There isn't really much room to move about inside anyway.