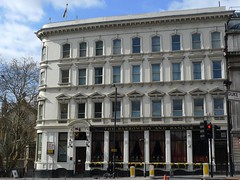 Fuller's Ale & Pie House near London Bridge, just south of the bridge itself and across the road from the station. According to an insert in the menu photo, the building used to house the first branch of the National Westminster Bank.

The drinking part of the pub is across two floors; a main floor with a double-height ceiling photo and a mezzanine above, reached via a spiral staircase. The interior is reasonably-sized and quite ornate, with carvings on the chairbacks, murals on the walls photo, and decorative pillars. Seating is a mix of sofas, banquettes, high stools and tables, and normal-height chairs and tables.

They have six handpulls, offering Fuller's ales including seasonal specials. In May 2013, these were Brewers Brass (£1.95/half), Spring Sprinter, ESB, and London Pride; they also had keg London Porter, Honey Dew, and Aspalls Cyder on tap. On the same visit, Kake's first pint of lime and soda was £1.20 and the second was £1.40, for some reason. When bob visited in November 2007, the Pride was very drinkable.

According to their website as of May 2013, food is served noon-9pm Mon-Tue, noon-10pm Wed-Sat, and noon-6pm Sun. According to the menu as of the same month, they also serve bar snacks from 4pm Mon-Sat. See photos of the menu as of May 2013: specials, starters/sandwiches/"classics", pies and salads, sides and puddings, bar snacks and sharing boards.

In May 2013 Kake tried the puy lentil, feta, and tomato salad (£9.25) photo. It was fine, though the lentils were a little too al dente for my taste, and it was pretty expensive for what it was.

As of May 2013, they have free wireless via O2; join the network, visit any web page and you'll be redirected to a form where you can put in your mobile number and they'll text you an access code. It's not clear how you can use this service if you don't have a mobile phone with you.

Accessibility: Several steps at the entrance. The toilets are down a flight of stairs, and if there's a step-free way of getting down there, it's not obvious.