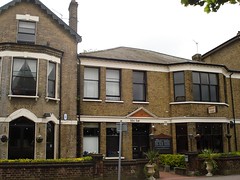 Despite its name, this is a pub, run by Antic and open to the general public. It used to be a lawn bowls club, and much of the decor still reflects that — right down to the notice in the main entrance that visitors need to be signed in by a member.

There are five rooms, including one with two full-size snooker tables upstairs, some tables out the front and out the back too. The bar is somewhat small, but at least on a mid-week evening service was quick and there was no queueing. There are three real ales, always including something from the Purity Brewing Co, normally UBU. At the time of writing the others are Black Sheep Ruddy Ram and Adnams Lighthouse. Other reviews do indicate that service isn't as good on busier Friday and Saturday nights though. The staff are very friendly.

Food is tapas-style, so if you just want a snack with your beer it's good value, but if you want a meal you're better off going elsewhere as enough dishes to satisfy will be quite expensive. There are also very good cheap home-made sausage rolls.

The furniture throughout is eclectic, appearing to be a mixture of stuff left over from the original bowls club, plus bits and pieces salvaged from junk shops and other pubs - perhaps this is where everything from Balham's other pubs, most of which have gone rather up-market, has gone.

This is a games-friendly pub. As well as the snooker tables, there is a small selection of board games behind the bar, and there is a regular Monday evening chess club. The South London Go Club also meets here on Mondays.

There is a ukulele club on alternate Sundays, with tuition available for newbies at a cost of £5.

Accessibility: There is a small step up to get into the pub, but otherwise most of it is on one level. The beer garden at the back has steps. The toilets are down a flight of stairs in the basement. The snooker room is up a flight of stairs on the first floor.