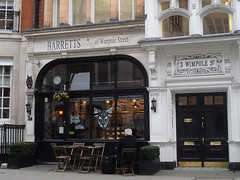 The interior is train themed, with tiling on the walls and a lovely model railway track suspended from the ceiling, with a couple of trains happily chugging around at a leisurely pace. The cafe previously occupying the site was rather run down, so it's pleasing to see a good job has been done with this revamp.

There are six tables inside, plus a ledge at the side with a handful of stools. There are also two tables outside on the street. It wasn't very busy on Kat's Friday morning visit in April 2014: there was no queue at the counter and two of the tables inside were occupied. I didn't spot a customer toilet.

As of April 2014 they have a breakfast deal (any coffee + croissant for £3) which works out cheaper than the Pret next door, although the coffee cup is slightly smaller. Cooked breakfasts were also being advertised.