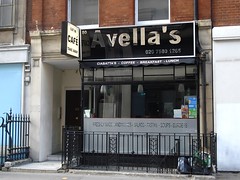 As of October 2011, this cafe is now closed and boarded. It is not clear whether it is being refurbished or reopened.

A family-run sandwich shop just off the northern end of Regent Street.

To the uninitiated, Avella's Cafe seems like just another London sanger shop which serves traditional greasy spoon fayre in the morning. However, the beauty in Avella's is the relationship between the family who run the shop - Mum, Brother and Sister (and possibly Dad? Not sure...) bicker and make faces behind each others backs, winking knowingly at customers and encouraging banter with regulars. The jokey insults aside, I feel like there's conflict simmering between every conversation they have, whether it's Mum asking Sister to peel some hard boiled eggs or Brother asking where the ciabattas are. You can't get this kind of thing at Subway.

Bec must confess to only ever having had the toasted spinach, cheese and avocado on ciabatta and the 'Vegetarian Job', toasted mozzarella, black olives, basil and tomatoes on ciabatta - but priced at £3.50, tasty, huge, and crucially, right by my office, they're highly recommended.