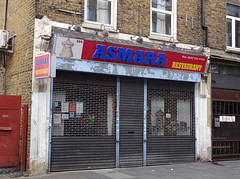 One of several Eritrean places in the Brixton area. It's not a big venue, with seating for about 20 people downstairs and another 16 upstairs (with no wheelchair-accessible route to the upper floor). This place is popular so book ahead on a Thursday/Friday/weekend, particularly for large groups.

Couscous and stews feature strongly in the menu but there is a good range with plenty of vegetarian options. Many of the dishes are hotly spiced, so do ask the staff for advice if you have a sensitive palate.

The most fun way to eat here is to order the Messob feast. This is a shared meal for a group, where the table is covered in very large, spongy and slightly sour pancakes called injera. The various dishes are ladled directly onto the injera; the diners tear off chunks of the injera and use them to pick up the food. The meal ends with a little coffee ceremony where the beans are roasted in front of you, with wonderful scents from the spices mixed in among the beans, and then served from gourds with straw filters. There are vegetarian and mildly-spiced variants of the Messob meal.

secretlondon visited on a Sunday in May 2010, as it had been recommended, often as one of the best African restaurants in London. Although it is sometimes described as Ethiopian it is Eritrean food they serve here, and quite an Anglicised version of it. The injeera were not sour and may not have been made of tef. I had bebiainetu, a mix of spicy meat (£9) and ajibo behmilti, spinach and cheese (£7.20) photo. I found it quite poorly seasoned compared to normal Eritrean and Ethiopian food. There was only one person serving so it took ages to get extra injeera and my bill. The prices of dishes were average for this cuisine.

itsbruce's verdict: I've had to change my opinion of this place drastically, based on a couple of recent visits. The service has deteriorated into near chaos and the quality of the food has dropped considerably. A real shame.

secretlondon's verdict: There are a number of Eritrean and Ethiopian restaurants in the area which are better, and I don't think this place deserves its reputation. However I like Ethiopian and Eritrean food.

Accessibility: The entrance is a bit tight, and there are stairs to the toilets.