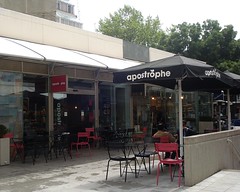 Cafe/coffee shop in Bloomsbury. It's part of a chain; as of June 2010 their website lists 16 locations, all of them in London. This one is located on the east side of the Brunswick Centre, next to the Starbucks.

It's really quite small, but there's a mirrored wall which helps it look a bit more spacious, and the interior has two distinct seating areas, one next to the mirrored wall with black pleather banquettes and cube-shaped stools, and the other nearer the window, with square wooden stools at counter-style "tables". There's seating for another 28 people outside, all nominally under cover, but really only the dozen seats right next to the cafe are properly protected from rain. There's no toilet.

secretlondon visted one Sunday in May 2009. I had a large americano (£2.15) photo and a chocolate tart (£2.60) photo. My chocolate tart was lovely — gooey and chocolatey. My coffee was so-so, but I like my coffee strong and it wasn't. They had a jug of tap water with fresh mint in which was nice; their mint tea is apparently dried, though. As well as coffee and cakes there were sandwiches on offer, some of which were tiny (almost 50p sized) and over £2 (admittedly they were rye and raisin or something, but still!). There was soft jazzy background music which was interrupted by the loud grinding of a machine, something like a coffee grinder or ice cubes in a blender.

Kake visited on a Tuesday morning in June 2010. I had an iced tea (£1.95), which appeared to be some kind of fruit/herb tea rather than actual tea. It was fine, not overly sweetened (if at all), and a reasonable volume for the price. I noted that they had various interesting juices on offer, including apple and beetroot — I suspect these may be the ones from Chegworth Valley. There were a few newspapers available for customers but I didn't note which ones.

secretlondon's verdict: It feels to me as though Apostrophe is trying too hard to be hip, yet safe and solidly middle class. Looking at their website I find it slightly embarrassing.

Accessibility: The Brunswick Centre has step-free access from a somewhat steep ramp up from Marchmont Street. Access from the square to the cafe is completely step-free. As mentioned above, there's no customer toilet.