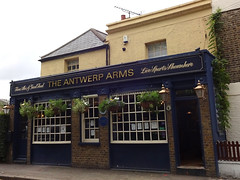 Community-owned pub in Tottenham, in the Good Beer Guide.

It's a single-room pub, with a bare-boarded floor, half-panelled walls, and a mix of armchair, padded bench, and upright chair seating. Interest is added by bowed windows at the front, what seems to be an original fireplace to one side, and football-related photos hanging on the walls.

(There's usually a courtyard garden out the back, but at the time of our visit, there was building work going on to extend the kitchen and bar, and the garden was full of builders' things.)

Kake visited on a Tuesday afternoon in September 2017. There was just one other customer when I got there a little before 4pm, apparently a regular. No music was playing, but Sky News was showing on a flatscreen with the sound on. Two of the four handpumps were on, offering Redemption Pale Ale (£1.90/half) and Redemption Hopspur. A packet of bacon fries was £1.

As of September 2017, food is served on Fridays, Saturdays, and Sundays only.

According to their website as of August 2017, they are dog friendly and "family friendly" (so presumably also child friendly).

Accessibility: A large step to get in. No steps to the bar, seating, or ladies' once you're in (gents' not checked).