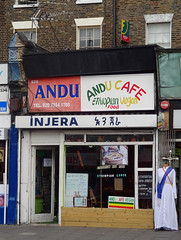 Vegan Ethiopian cafe in Dalston, quite close to the southern entrance to Dalston Junction Station. They also do takeaway.

The menu photo is very simple, consisting of six vegan dishes served together as a "sampler" platter; the main choice is whether you'd like them served with injera or rice. If you choose injera, you also get the choice of having the dishes in a metal tray with injera on the side (the default) or on top of the injera. They don't serve alcohol, but are happy for you to BYO.

Kake visited on a Tuesday early evening in August 2016. There were three or four people in when I arrived just before 6pm, and it wasn't clear whether they were customers, staff, or friends of the owner, as they were sitting at the very back and weren't eating. Two definite customers arrived while I was there though.

I had the sampler platter for one, served on injera (£7 total) photo. Gomen (chopped collard greens with garlic) was very tasty, cooked with a few softened onions to add interest, and just the right texture. Ater kik (split peas with tumeric) was also cooked just right, with a firm bite to the split peas but no chalkiness. Green beans and carrots were similarly well-judged in terms of cooking time. Shiro wot (stew made from ground chickpeas) had a nicely smooth texture and an interesting flavour I've not encountered in this dish before, somewhat reminiscent of red palm oil. The injera itself was probably the sourest I've had in London, and darker than average too.

Kake's verdict: I'd happily come back if I was in the area and wanted a quick meal, or if I was craving some properly sour injera.

Accessibility: A ridge at the threshold, then a ramp, then another ridge to get in. The toilet is a single tiny cubicle with a door that opens outwards, down four steps with no handrail.