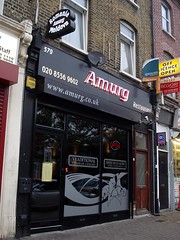 Romanian and Moldovan restaurant on the High Road in Leytonstone. It opened in late 2008.

Inside, there's seating for around 45 people, at spacious dark wood rectangular tables surrounded by plush lilac banquettes and matching high-backed chairs. The walls are pale, with red pillars at intervals, and tiny point lights accent the ceiling.

Kake and bob visited on a Wednesday evening in May 2011. The place was empty when we arrived a little after 8pm, though a few more customers turned up while we were there, including a couple with a baby. The lighting was quite dim, and music videos were playing on a flatscreen with the sound on — American R&B (Usher) as well as Romanian artists (Edward Maya, LuKone).

Gustare rece (mixed cold starters; £7) photo were quite substantial, including slices of salami rolled into flower shapes as well as decoratively cut cucumber, tomato, and red pepper, two kinds of sliced ham, and two types of cheese (a fairly bland yellow one and a sharper white one, possibly made from sheep's milk).

Another starter of salatǎ de vinete (aubergine caviar; £5.85) photo had a good smoky flavour, though this was somewhat muted by the mayonnaise included in the dish. For some reason it was served with toast made from bog-standard sliced white; the complimentary bread basket offered a more worthy accompaniment.

A main course of mititei (grilled skinless Romanian sausages; £9 including a side dish) photo were meaty and well-seasoned, and the chips bob chose to accompany them were skin-on and very nicely crispy.

Our other main, fasole batuta cu carnaciori (mashed beans with sausages; £8.90) photo suffered from being over-salted; this aside, the bean puree was well-textured and marvellously garlicky, and went well with the long, thin sausages. A garnish of pickled gherkins and peppers provided a nice contrast. Although a proper side dish would have been included in the price, our waiter said we didn't need one, and he was right.

Accessibility: A step to get in, but stepfree after that. The ladies' doubles as an accessible toilet.