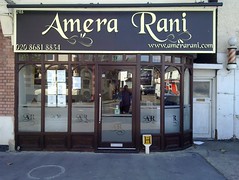 Indian restaurant in South Croydon. They also do takeaway and delivery, and you can order online via Just-Eat.

Kake and bob had a delivery in February 2012. The food took a little over an hour to arrive, which was within the time they originally estimated, even though they're a fair distance from our house.

Gymkhana lamb chops (£10.50) were well-spiced and well-seasoned, though sadly lacking in crispy fat. They were mostly deboned, making them easy to eat. Salmon tikka (£10) had a nice char, and the fish was no more overcooked than one might expect from a takeaway that had travelled some distance — it would probably have been just fine if we'd eaten in.

Baigan and makai bharta (smoked aubergine with sweetcorn; £5.45 as a main dish) was subtly smoky and not overly oily as Indian takeaway aubergine dishes so often can be. The sweetcorn was perhaps a little tough-skinned, but this is a minor quibble. Tarka dhal (£3.45 as a side dish) was cardamom-heavy, though this worked well. There seemed to be a few different types of lentil in there. Again, it wasn't overly oily.

Keema naan (£2.45) suffered from the takeaway process; the bread wasn't as good as if we'd eaten it fresh. The keema filling was fine, though; not dyed red as it often is, and actually tasted of something. Basmati rice (£2.50) was fine.

Kake's verdict: I would happily order from here again, and would like to go and eat in, too. Certainly well above average for a takeaway, though this is partly reflected in the price.