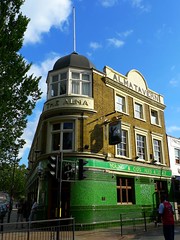 Young's pub directly opposite Wandsworth Town Station. Formerly known as the "Alma Tavern" (which is still clearly visible on the building).

Outside, the pub retains its original brickwork and tiling, while inside it's similarly lovely. The decor is reassuringly wooden, and the tables solid and large. There are some preserved features dotted around but not so many as to overwhelm the place; most obvious is the four-sided island bar in the centre of the room. There is a separate restaurant dining room at the back with a beer garden beyond, and a prominent staircase, presumably to a function room upstairs. There is a good range of newspapers available for reading, as well.

On a Wednesday evening visit in April 2008, all the tables around the room were full, but it was possible to hover at the end of a long table, or stand at the bar. Despite the many people sitting along the bar, there was no worry about not being seen by the bar staff. It's clearly a popular place, with good reason. On a Thursday evening visit in August 2009, the pub was only half-full, with a few groups of smokers hovering outside and in the beer garden. However, on another Thursday evening visit in September 2012, it was unpleasantly crowded at 9:45pm, with all seats taken and people crammed in around the bar.

The (well-kept) real ales on handpull in August 2009 were Young's Ordinary and Special, Kew Gold, and Bombardier. Leffe, Hoegaarden, Peroni, and the other usual lagers were available too. They also had Addlestone's cloudy on handpull, though in Kake's opinion it was slightly past its best.

As of August 2009 they serve bar food all day Monday to Saturday, including a range of sandwiches with chips (served noon until 6pm, £5.50-7) and pub "favourites" such as steak, a burger, fish&chips etc (£9-18). Bar snacks include two flavours of Coan biltong.

The restaurant menu photo has a wider selection including starters and desserts, with prices for mains in the same range. We gave this a go in August 2009. Kake tried the pickled mackerel with parsley panure, crunchy celery, and broad bean and chilli salsa (starter, £6.25); obvious care had been taken over the presentation, with the celery shredded into long thin curls atop the mackerel, and tiny perfect brunoise of tomatoes and green chillies in the salsa. Unfortunately the mackerel itself was mushy and entirely devoid of texture — it could have been almost anything under its coating of breadcrumbs and parsley — and tasted of nothing other than vinegar. Very disappointing.

There's free wifi — connect to the obviously named access point, and "login" with your email address and mobile phone number (no checks for validity; it happily accepted example@example.com and 999, respectively, when we tried in August 2009).

Accessibility: Toilets are down a flight of stairs with a sturdy handrail on one side.