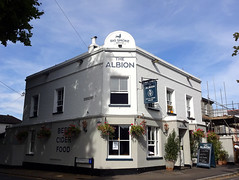 It's run by the Big Smoke Brew Co, who also run the Antelope in Surbiton, the Sussex Arms in Twickenham, and the Express Tavern in Brentford. Unsurprisingly, it has an excellent selection of beers, served from 15 handpumps and 20 keg taps.

The decor is smart but not pretentious, with a bare-boarded floor, a low ceiling with recessed spotlights, and long padded banquette seating towards the back. There's a book exchange shelf too — take one, leave one. Beyond this is a beer garden; part-patio, part-astroturf.

There were a fair few people in when we arrived a little after 4pm, though still plenty of space inside. Music was playing, fairly interesting, and not too loud. Service was friendly and helpful; we were asked if we'd like help choosing, and offered tasters once we'd named a style.

In August 2017, Kake and bob tried a few of the small plates plus one big. Fried squid with lemon aioli (£6) photo wasn't bad, but the batter was a little greasy and still a little floury-tasting, and one of the pieces was over-browned. Skin-on chips with garlic mayo (£3) photo were more browned than one might expect for the amount they were cooked, and we suspected that the oil in their fryer might have been due for a change.

Padron peppers (£4) photo were good, cooked appropriately and finished with just a touch of salt. Chicken wings (£5) photo were fine. Haddock goujons with tartare sauce (£6) photo weren't bad, though the fish was perhaps a little overcooked and the breadcrumbing a little greasy.

BBQ ribs with coleslaw and chips (£14) photo were nicely done, not dry at all, and the meat fell off the bones. There was a suitable amount of sauce.

Child-friendliness: There were several babies and children in during our visit. There's a nappy change table in the accessible toilet.

Accessibility: A step to get in. Another step to the top level of the beer garden, and a couple more to the astroturfed part. Once you're in, it's step-free to the accessible toilet, though the latter isn't quite as accessible as it could be, since the sink is jammed into a corner and hard to reach, and the paper towels are mounted high on the wall.