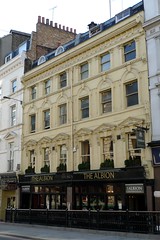 Young's gastropub near Blackfriars Bridge, and by the Ludgate Circus corner of Fleet Street.

bob visited on a Thursday evening in June 2008. The beer was fine. Young's Bitter was £2.95/pint, and they also had Deuchars IPA and Bombardier on. On Ewan's November 2010 visit they had the usual Young's including their seasonal Winter Warmer.

Food is served noon-10pm daily. Fish and chips (£7.50) were fine photo. On Ewan's visit, a vegetable pie was fully encased in pastry, but somewhat lacklustre, though still good value.

The interior was very funky photo. Seating downstairs is mostly high stools, but with a few tables around the edges, and two large screens showing sport. There's also an upstairs dining room.

Accessibility: Toilets are not accessible. The stairs down to the gents' are a touch short.