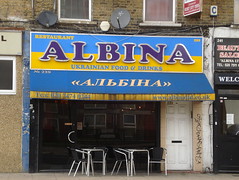 It's long and narrow, seating only about 35-40 people at tables and benches made from logs and planks. However, the tables are spacious, and there's plenty of room on the benches. Flowers sit in little bowls on each table, and places are set with woven tablemats, wooden-handled knives and forks, and florally-decorated side plates.

A small bar with a thatched roof occupies a corner at the far end of the room, with a couple of bar stools drawn up to it. Two flatscreens are mounted by the ceiling, one halfway down the room and the other at the end with the bar. The walls are filled with paraphernalia, including crockery, trompe l'œil windows showing pastoral scenes, and dolls wearing traditional costume.

Kake, bob, and friends (including a toddler) visited on a Tuesday evening in February 2014. We'd booked a table, but could have got away without a booking, as there were only a handful of other customers in during our visit. Some kind of TV was showing on the flatscreens, and music was playing — mostly not too loud, though at one point it was turned up very loud (and shortly afterwards back down again).

A starter of Albina special salad (Альбіна; £7) photo, though based on julienned smoked meat and cheese, had nicely crunchy red peppers and croutons to give a contrast of texture. Herring with onion (оселедець з цибулею; £5) photo was a little too salty, though the texture of the fish was good. The black bread suggested by our waiter (20p/slice, 2 slices per person brought by default) went very well with this.

Meat pancakes (млинці з м'ясом; £6) photo were somewhat greasy, and the minced meat inside a little bitty. Potato cakes with sour cream (деруни з сметаною; £6.50) photo had a lovely crunchy exterior contrasting with a creamy interior, and were perhaps our favourite of all the starters.

A main course of rabbit with sour cream (кролик запечений в сметані; £12.50 plus £1.50 for a side order of buckwheat) photo incorporated a beautifully tender rabbit leg, not dry at all. The sour cream sauce was disappointing though; overly stodgy, and resembling nothing so much as white sauce made from a packet mix. The buckwheat was plainly but competently cooked, and a good-sized portion.

Home made stew (жарке по-домашньому; £9.50, complete in itself with no need for sides) photo came in a lovely little ceramic pot. The stew itself was nicely herbed, and the smaller pieces of pork were nicely tender, but the larger pieces were quite tough. Pork steak with prunes (£12 plus £1.50 for buckwheat) also had rather tough and dry meat, in this case overcooked.

Pork shashlik (шашлик свинний; £14) photo came on a long skewer; our choice of home made potatoes (жарена картопля; £3.50) to accompany this had a nicely browned exterior but were somewhat undercooked inside. Finally, potato dumplings (вареники з картоплею; £6.50) photo were nicely al dente, and the topping of caramelised onions was just right.

From the extensive drinks list, we had a few glasses of Moldovan semi-sweet white (£7/200ml) and a couple of Ukrainian and Russian beers (£3.90), the latter served in a crockery tankard photo.

Our final bill photo came to just over £20/head counting just the adults' food. No service charge was added.

Kake's verdict: Undecided. Some of the food we had was good, but much of it was flawed in some way. The drinks list looks interesting, and I'd probably focus on that if I visited again. I'd also like to try the soups, as other reviewers have singled them out as being good.

Child-friendliness: They have at least one high chair, though it's the type with no tray. The staff were friendly and welcoming towards the toddler in our party.

Accessibility: Two steps down immediately inside the door (involving a 90-degree turn). There's a wide aisle leading down to the bar and toilets.