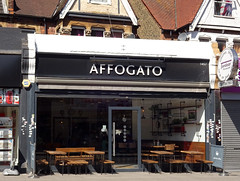 It's on the upmarket side, with modern but subtle decor in greys, creams, and browns. The tables are sturdy slabs of wood atop iron frames — some smaller, some larger and seemingly communal — and the seats are padded in brown pleather. A mid-2018 refurbishment saw the removal of the previous long service counter, creating a much more open and uncluttered feel; now, it's entirely table service for both ordering and paying, though a small display of cakes and ice creams remains to one side of the room for browsing. Four small tables sit out the front on the pavement.

Tea options are limited, but are 100% loose-leaf, supplied by We Are Tea. All the meat is halal, and the breakfasts use turkey bacon and beef sausages.

Kake has visited several times now, at different times of day. In August 2017, there were just two other customers when I arrived around 9:15am, and after they departed I was on my own until it started to fill up again around 10am. Talk radio was playing at a volume which wouldn't have impeded conversation but was a bit too loud to easily ignore. On a Thursday lunchtime in April 2016, there were half a dozen people in when I arrived around 1:30pm, and by the time I left half a hour later this had dwindled to three. On Thursday afternoon visits in March 2016 and January 2018, on both occasions there were about a dozen other customers when I arrived a little after 2:30pm, and several more came and went while I was there. No music was playing, but there was plenty of lively conversation.

In April 2016, eggs florentine (£5.50) photo was well-presented, and a change from the usual in that one egg was on the traditional spinach while the other was on a halved tomato (this was clearly indicated on the menu). The spinach was nicely seasoned and nicely cooked, and I wished there had been more of it. The yolks of the eggs were properly runny, spilling out at the mere touch of a knife, but unfortunately so in part were the whites (still, I'd rather have slightly runny whites than a hard yolk). The muffin was a bit too doughy for my taste. I was initially a bit sceptical of the reduced balsamic drizzle, but it turned out to be nicely balanced, not too sweet, and a useful extra little kick of tanginess.

In August 2017, shakshuka (baked eggs in tomato/onion sauce, £7) photo was pretty good, served in a small cast-iron pan that kept it warm throughout and had also produced some flavourful browning of the sauce at the bottom of the pan. The egg yolks were runny as requested, and the sauce had a good balance of sweetness and sharpness, as well as a nice hint of spice. The eggs, sauce, and bread were in good proportion to each other.

In January 2018, I had a breakfast muffin (£5) photo which included a fried egg, a slice of cheese, some turkey bacon, and a hash brown. It arrived deconstructed, with the bacon and hash brown perched on top, but once I'd put it all together it was a good combination of textures and flavours. The egg yolk was creamy with a runny centre, which worked very well.

In July 2018, the vegetarian English breakfast (£8) photo was more filling than it initially looked, and had a good combination of both textures and flavours in the ingredients: some well-reduced baked beans, two slabs of halloumi, a little pile of spinach (sadly a little gritty), two competently-cooked hash browns, and two fried eggs with medium-runny yolks atop a slice of multigrain bloomer.

In November 2019 Kake had the eggs hedderman (£8) photo, which comprised a slice of sourdough toast topped with mashed avocado and two poached eggs, with feta and hedderman sauce (which appeared to be sort of thousand-island-like) on the side. The toast was made with good-quality bread, with a firm but not tough texture and a nicely flavourful crust. One of the eggs had a properly runny yolk, but the other was a little too solid for my taste. The feta had a good flavour and was just the right amount to add saltiness to the mix, but would have been better not served fridge-cold. The avocado was fine.

In March 2016 and January 2018, pots of peppermint tea (£1.90) photo were nicely refreshing, with a strong but not harsh flavour. In August 2017, peach iced tea (£3) photo came with a huge amount of crushed ice, which watered it down rather too much and also made it a rather small portion for the price. The peach flavour was nicely subtle, though, and it wasn't overly sweet. In July 2018, a passion fruit, papaya, pineapple, peach, guava, and aloe vera smoothie (£3.50) was a generous size, served in a pint bottle with a straw, and a good balance between sweet and sharp.

Unfortunately as of November 2019 they've replaced their previous teapots, which had a plunger to separate the leaves, with new ones that have no way to remove or separate the leaves to stop the tea over-brewing, and the cups are too small to pour it all at once.

Service was friendly on all these visits. No service charge was added to the bill.

They have free wireless via XLN Free WiFi (no password required).

Kake's verdict: I come here fairly often (though this is partly because it's only three stops on the train from my house) and would recommend it to others who happen to find themselves in the area. It's a good place to work for a couple of hours.

Child-friendliness: They have a relatively interesting children's menu. There's a pull-down baby change in the (unisex) toilet.

Accessibility: A step to get in. No steps to toilet (single unisex cubicle).